These were the words that I wrote in the congratulatory card for our son, Kian Joo (who is or fondly called Joo) on the day of 7th August 2010 where he walked on stage of Melbourne University to receive his Commerce Degree with First Class Honours! 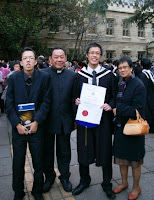 I carefully chose these words that could reflect how we as parents feel for Joo at this milestone of his life. His achievement is a shared one for there were 4 parties involved in his crowning achievement. For sure, there’s my wife, Angeline, his younger brother, Jin, his grandma, Mama Dulcie and me. While I have contributed to his intellectual and mental growth, Angeline has contributed a great deal to his personal growth that built him to be a very fine young man today. In his own way, Jin provided him the challenges to draw out his sense of love, responsibility, selflessness and the generosity of his love and support as his elder brother. His grandma, Mama Dulcie, gave him love, showed him love and taught him love. And of course, the man himself, Joo, who had to ‘grind the mill’ putting in the efforts, hours and the sacrifice of leaving home for the last 3 years.
So how do we really feel inside? Really proud, and really fulfilled. That’s all we can express. He was our successful ‘test case’ for putting our hands on parenting skills from the time of his birth 23 years ago. We were excited about his coming into the world, but were inexperienced then like all parents were. We had never really handled a kid before except for some ‘light experience’ as ‘god parents’ to our nieces and nephews.
But come to think about it, it wasn’t that difficult to deal with Joo all along. Except for some occasional heart attacks he gave us when having small fights with his younger brother, Jin, it has been smooth sailing most of the time. I guess it was searching for and finding the right ‘parenting formula’. So what was ours? An open family architecture that is supported by trust for each other, communication openness, acts of generosity, instant and sincere feedback giving, intellectual exposure and daily role modeling as parents. The rest was left to him to work it out. And it worked, and well beyond our expectations too!
As I have said, Joo is a fine man today. We are 100% at peace with him and with whatever he is doing. We know he knows when he is crossing the limits. Truly, we are really proud of him. It is not only about his brilliant academic achievements which he had demonstrated at each stage of his school, college and university life. He is also brilliant in his personality and character that packs in a set of values that keeps him in check as he really moves now into the adult world of challenges and opportunities. We know he will make it out there in a world where relationship is important. We know this when we were in Melbourne for a week. He has many friends in every nook and corner of the city and beyond. I guess the most gratifying thing to know is he is most balanced, where all parts of his life matters – his career, health, social life, personal growth, his family (always take us as his guiding light) and his spirituality as a God fearing young man. 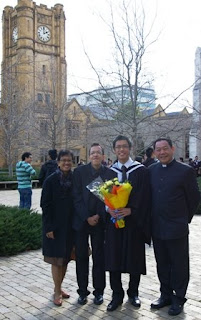 The moral of my story is about laying the foundation stone, and laying it right. Well, there’s some hard work in the beginning for sure. But once you have done it well, the rest of it is simply really enjoying the fruits, watching how it blossoms right in front of your eyes. Isn’t this the kind of life fulfillment that everyone wants to have? Aren’t we proud? For sure, to Angeline, Jin, Mama Dulcie and me!
I am sure you too have similar experiences in helping someone grow. Why not share this to help others who may want to know how or even help those who have to revisit their parenting methods to reap better results. Click on Comment below and pen your thoughts and experiences.

As usual, come July, ETN or Explorer Tourism Network gets into its ‘ritual’ of mindset and skills coaching to transform its people into talents under its Talent Management Initiative. Together with its CEO, Herman Lim and the Financial/HR Director, Ooi Ling Ling , we have, for the last 2 years, been working very closely to build ETN’s brand of Talent Management System (or TMS).

I know many organizations are into talent management, and I have been involved in many of it as well. The uniqueness of ETN’s TMS lies in these areas:

Firstly, they are really serious and committed to it. Why, the top bosses are not only involved in every step of it, but possess ‘people values’ that guide the way they have been managing the business for the last 12 years.

Secondly, it is only a company of 18 people where most other companies would have said these words ‘we are hardly surviving; we do not have the money nor the time to build them, let alone they running away after being trained!’

Thirdly, they are in the travel business where even many of the big boys (with due respect) relegate people development to a far corner of their priority list. No wonder ETN is a highly profitable organization both in good times and very bad times. It is growing very well, clinching new and big accounts. Clients simply love to deal with an organization such as ETN which possesses noble values of integrity and quality standards by a truly young team of committed staff. Taking this ‘road less travelled route’ has proved many organizations wrong that it is a waste to take people, develop them, and share its success with them.

ETN is truly a family with a wise and caring ‘father and mother’ role played by Herman and Ling Ling. Inculcating in them good ethics and values, and role modeling them in the everyday work life certainly bring joy, happiness, fulfillment and success to everyone. I am glad I am part of this as well.

Do you have similar experiences? What your views? I would love to hear your story.