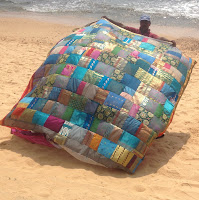 When I was in Sri Lanka recently, I did something different one day while I was having my lunch at a restaurant besides one of its lovely beaches.

I couldn’t help but kept watching a man selling bed sheets there. Although it was an absolutely boring scene, I watched him for almost an hour to see whether the management principle of ‘if you keep doing the same thing, you will keep getting the same result’ holds true.
His selling ways were mechanical and pretty fixed. In the scorching sun, he took out his bed sheet one by one from his worn out bag and then followed these steps: flipped it in the air for it to open with the help of the strong sea breeze to showcase the many varieties of bed sheets he had, folded it back, took out another, and repeated the same process over and over again at least 50 times during that hour!
Somehow he was ‘oblivious’ to the surrounding when he was doing all this; there was neither passerby walking along the beach nor patrons at the restaurant except for the lone me who was eating and watching him in action.
I was praying and hoping that he would eventually change his  sales approach but he did not.  He was not even at all discouraged and continued to do the same thing over again and again. But the sad thing was, and not surprising that not a single enquiry, let alone , sale was transacted in the one hour I was watching him. 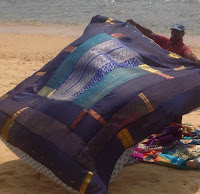 Except  for the little donation which I gave him out of pity, I don’t think he had much to bring back home despite all the efforts he put into the day’s work!
Why I am telling you this ‘small’ story is because it has a ‘big’ meaning to many of us.
Many of us are like this man; so fixed in our ways that we don’t allow ourselves to get out of our die hard habits to get more from our efforts. We stubbornly refuse to step out of our own comfort zones even though things are not working well for us. Yet we complain and blame our fate, luck, even God for our current state.
Like this poor man if he had thought of other ways; stepping out of the beach area, walk up to me, strike a deal with the restaurant owner, or even sell something else, his life might stand a better chance of some measures of success.
Indeed it is true; if we continue to do the same thing, we will continue to get the same old results. He taught me a good lesson without him realising it.
So what is one thing you will change to get more out of your life?
During the recent Chinese New Year (CNY) celebrations, I did something that I would had normally passed over. This time I paid what I called ‘empathetic’ attention to the merry making of my Chinese friends and the community, observing  them indulging in food and drinks and also admiring them for  their generous giving of bonuses  and even donations to charitable causes. I was also generously celebrating more too!
Thus, this year was particularly unusual. Why was it different this time? For one, I guess the ‘coach’ in me had grown that had gotten me thinking and reflecting more positively harder now than before.

In truth, I was thinking of myself more and placing the ME  just as important as other people.

“Celebration” has taken on a new meaning!

I found out that when I dare to celebrate,  it is directly related to how generous I am to myself  to reward myself  for the good work  I’ve been doing. It is a silent way  to affirm  and congratulate myself through a shower of gifts that I give myself;  be it a dinner, an outing, a show, a gift or anything  that will make me feel good about myself.

Behind all these external show, beneath it lies my self esteem as to whether it should be taken care of.  Do i dare say that I’m just  as important  to be treated just as what i would do for someone else?

I am glad i got myself to a new level of thinking for until recently,  this new meaning of ‘celebration’ was totally unheard of. I was too grounded in a past of ‘having to work hard to survive’, that made me felt that I wasn’t  ‘eligible’ to  enjoy myself or spoil myself for good work done.  Then, it was really all about others rather than me.

This new meaning has now freed me more from just ‘sweating and toiling’ to ‘smelling the flowers more” that are laid all along my life pathway to be savored and enjoyed.

Indeed,  this Chinese New Year celebration was worth remembering more than others in the past.   And I commit myself to have more celebrations from now onwards. Life is indeed to be enjoyed!

Kudos to the ‘enlightened’ Michael!

What is your view about self celebration?